The main scientific goal of our group is to understand how protoplanetary disks evolve to a diverse population of planetary systems. We aim to investigate the missing link between observationally accessible phases -- how small grains grow into the first planetesimals in different environments that have not been yet studied. Our research will focus on planetesimal formation in typical and extreme conditions, as for example: protoplanetary disks in highly-irradiated environments, circumbinary disks, and very low mass disks.

Keep tuned for our current and future research! We are some examples of our most recent work. 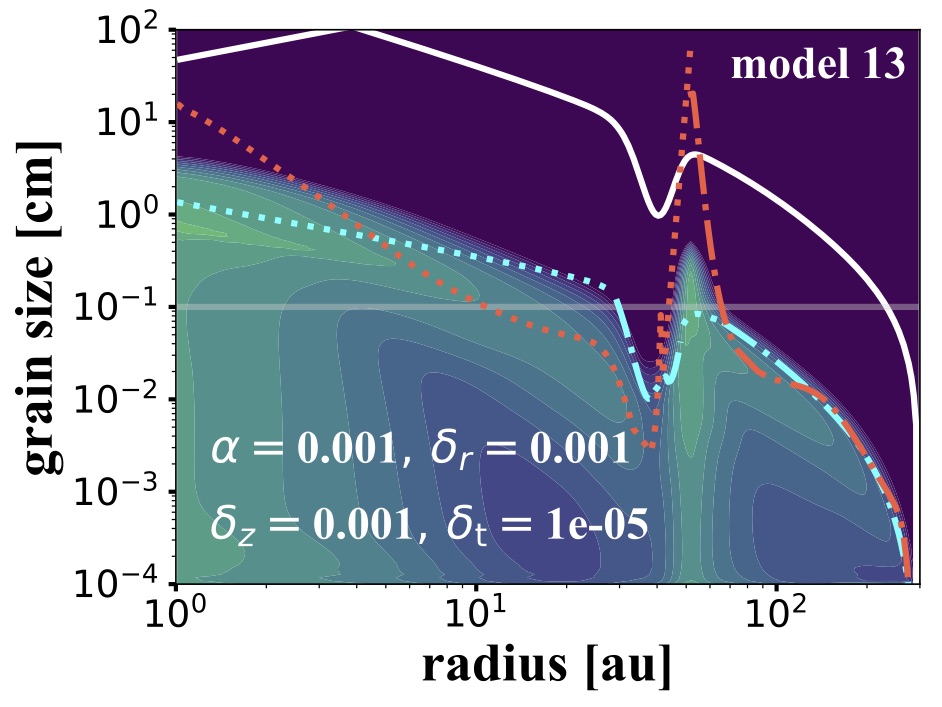 Recent laboratory experiments indicate that destructive collisions of icy dust particles occur with much lower velocities than previously thought. These fragmentation velocities play a crucial role in planet formation because they set the maximum grain size in collisional growth models. When considering these new velocities from laboratory experiments in dust evolution models, growing to pebble sizes (typically millimeter to decimeter sized particles) in protoplanetary disks is difficult, which may contradict (sub-) millimeter observations and challenge the formation of planetesimals and planets. We investigate what conditions are required in dust evolution models to grow and trap pebbles in protoplanetary disks with low fragmentation velocities in entire disk. In particular, we disentangle the parameters controlling the effects of turbulent velocities, vertical stirring, radial diffusion, and gas viscous evolution, always assuming that particles cannot diffuse faster (radially or vertically) than the gas. We provide a combination of parameters that can allow the formation of pebbles and their trapping in pressure maxima. Results in A&A 645, A70 (2021)

Size and Structures of Disks Around Very Low Mass Stars

Recently, we present a small survey of protoplanetary disks observed with ALMA around very low mass stars (10-20% Solar masses). The observations of such disks are very challenging because these are usually faint and very distant. We performed analysis in the visibility plane to characterize the morphology of these disks. We find that 50% of the sample show sub-structures as observed in disks around stars as our own Sun. This has very important implication in the topic of planet formation because it shows that it is possible that massive planets (as Saturn or Jupiter) may form in these environments, challenging our current understanding of planet formation. We also find that for the disks without any sub-structures, radial drift is effective leaving a gas disk extension that is much larger than the dust disk extension, and this difference is the largest observed so far in any protoplanetary disk. Results in A&A 645, A139 (2021) and in this MPIA press release.

Related to this topic, we recently published high resolution ALMA observations of the disk around the very low mass star CIDA 1, showing a bright inner disk and a large gap (20 au in radius). We contribute these structures to the presence of a planet inside the gap of around 0.5 Jupiter mass. The results are in accepted paper.

We analize deep ALMA observations of the disk around HD 100546, confirming the existance of two rings as suggested in the paper by Walsh et al. (2014). These observations show that the outer ring (at ~200au) is much fainter (by a factor of 1000) than the inner ring (~at 13 au). When assuming that planets cause the observed gaps and rings, the contrast of the rings give strong constraints on the properties of the embedded planets (location, mass, and formation time-scales). Pinilla et al. (2015) investigated the potential properties of the planets in this disk, suggesting that the outer planet needs to form much later (after 1 Myr) than the inner planet to explain the contrast of the rings. With the recent ALMA observations, we move our models a step forward and run multi-fluid simulations (gas and multiple dust species) to better constrain the properties of the potential embedded planets. The estimations for the outer planet mass are around a factor of 10 lower than in Pinilla et al. (2015) while the formation time-scales are similar than found before. The results of this work will be submitted by Max Ackermann in the coming months. 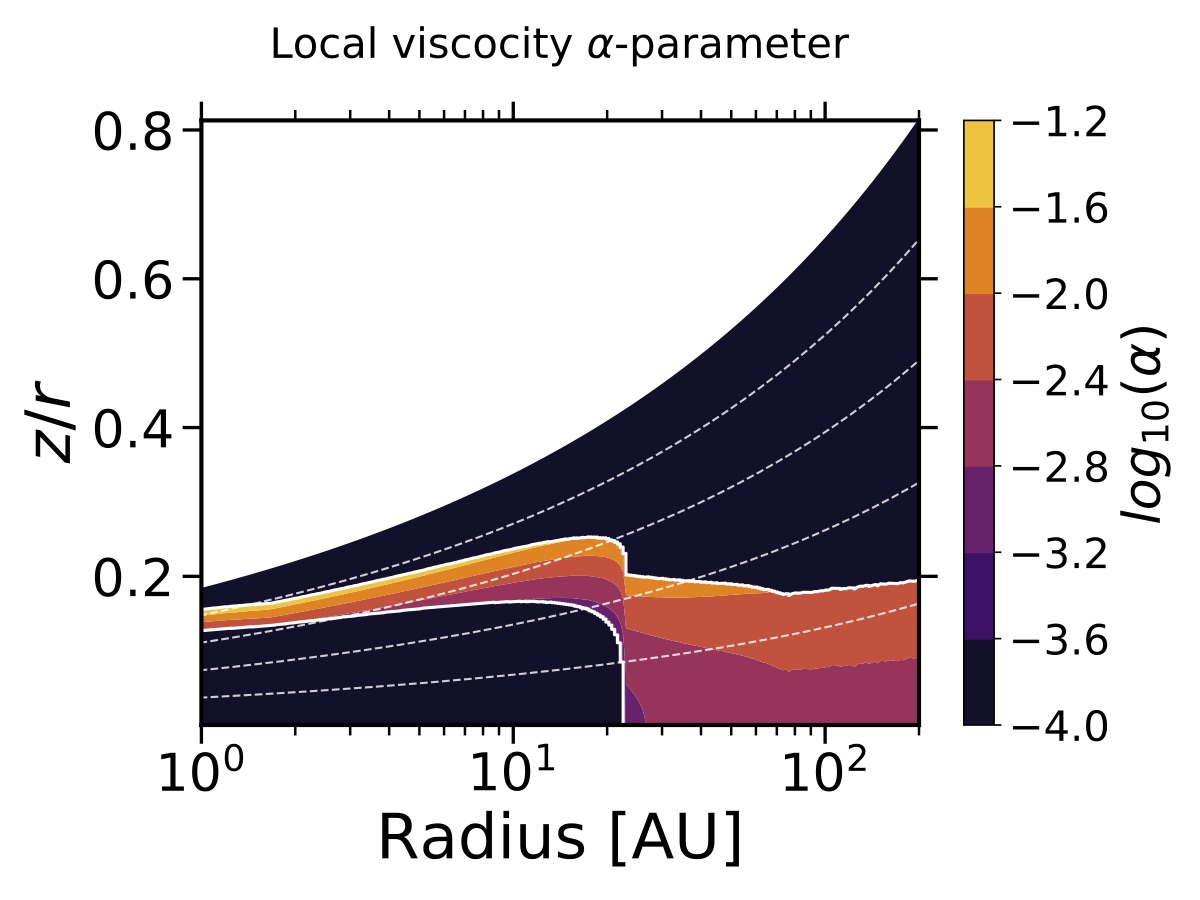 Protoplanetary disks are weakly ionized environments where the non-ideal MHD effects play an important role in the gas dynamics. As such, the magnetorotational instability (MRI) cannot operate everywhere and generate a fully turbulent disk. Instead, a so-called dead zone naturally occurs, where the turbulence level is low and dominated by non-MRI stresses (e.g. hydrodynamic instabilities). The most promising location of a dead zone is its outer edge. Previous studies have shown that the dead zone outer edge can efficiently trap dust particles, hence being a possible explanation for the origin of the observed disk sub-structures. In order to properly assess the dead zone mechanism as a potential candidate, gas/dust evolution and non-ideal MHD calculations must be coupled. The first step towards this goal is to obtain an appropriate parameter encoding the disk turbulence level called the turbulent parameter alpha.

In Delage et al. (to be submitted), we build a 1+1D magnetically-driven disk accretion model where the turbulent alpha-parameter is self-consistently determined from detailed considerations of the MRI and non-ideal MHD effects (Ohmic resistivity and Ambipolar diffusion) -given stellar properties (mass and luminosity), disk mass and dust properties. The main processes we include are: (1) irradiation from the forming star; (2) dust settling; (3) ionization from stellar X-rays, galactic cosmic rays and the decay of short/long-lived radionuclides; (4) disk chemistry; (5) turbulence driven by the MRI accretion and hydrodynamics instabilities. Particularly, we apply our framework to investigate the outer structure of steady-state viscously accreting protoplanetary disks, and determine what are the key parameters at play by conducting an exhaustive parameter study. 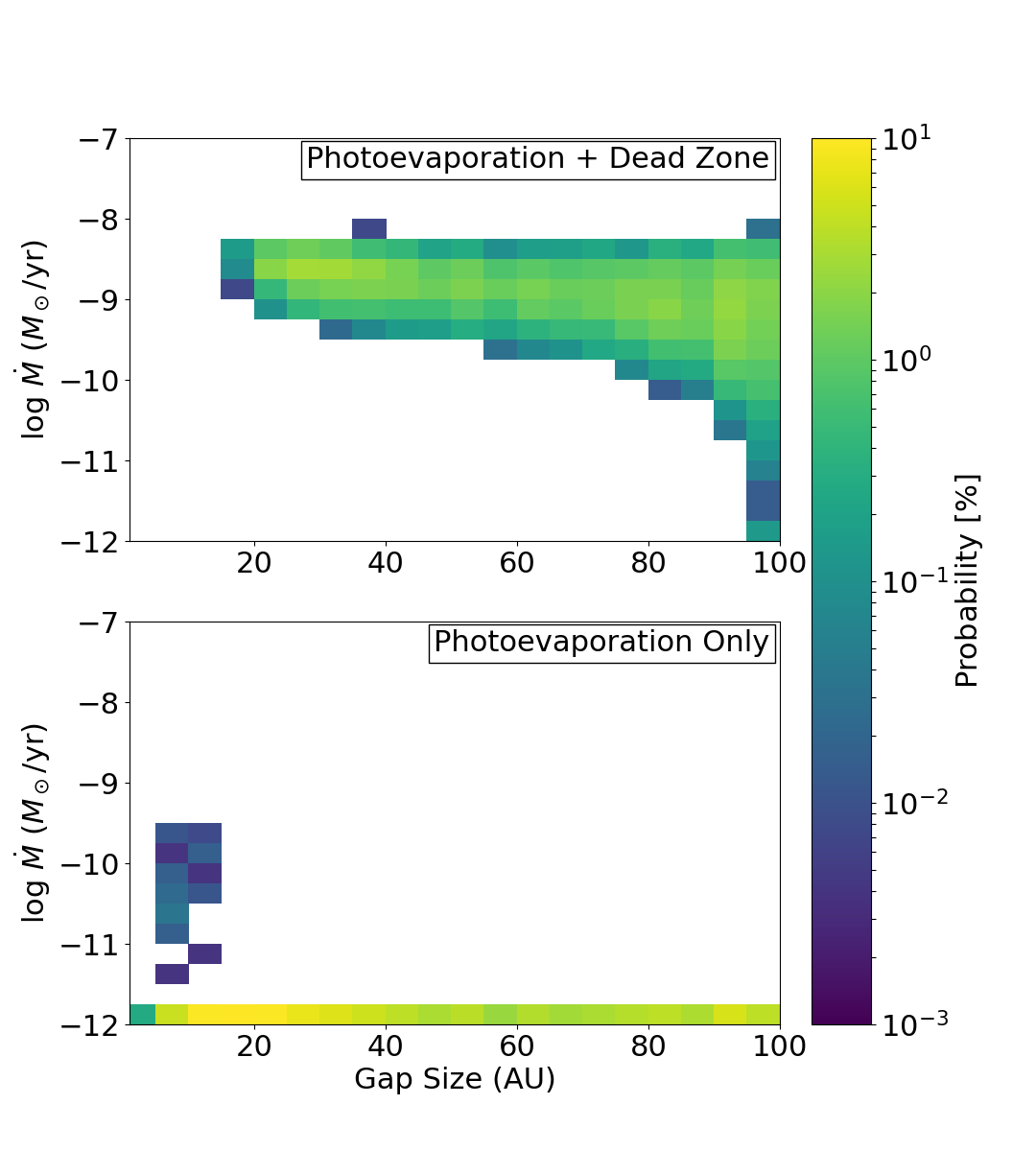 To understand the observed properties of transition disks, we study the gas and dust evolution models of protoplanetary disks, combining dust growth models with different physical processes, including: dead zones, snowlines, mutual drag between gas and dust, and photoevaporation. Currently, we focus on explaining the large gap sizes and high accretion rates observed in transition disks. The above figure shows the probability distribution of the gap sizes and accretion rate for a population synthesis model for disks dispersing through X-ray photoevaporation, with and without considering the effects of a dead zone. We demostrate that in this scenraio is possible to have a large number of transition disks with large gaps and high accretion rates as observed. Results are in Gárate et al. (to be submitted).